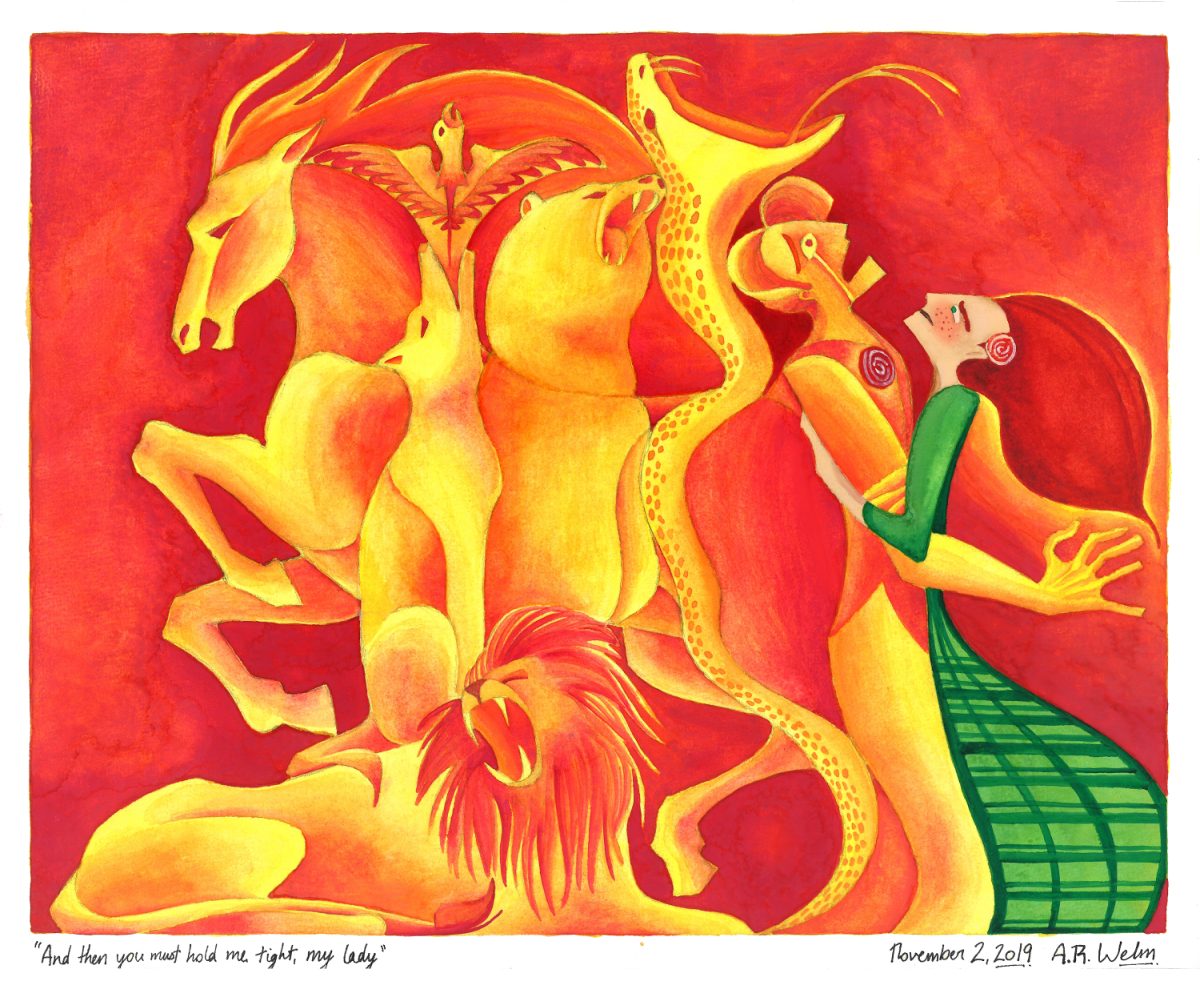 I recently watched a documentary about the making of Pink Floyd’s Dark Side of the Moon – one of my desert-island albums – and a number of overriding themes caught my attention: a deeply personal source of inspiration, the use of incubator spaces (the Rainbow Theater and Abbey Road Studios), and a selfless and generous collaborative spirit (co-composed words and music, Clare Torry’s phenomenal vocal improvisations, producer Alan Parsons’ audio sampling, and many others), all coming together to bring about a new creation with uncommon ease.

It was a surprise, then, when these very same traits came up in conversation with the creative leaders of two seemingly complex projects, the subjects of 5BMF’s upcoming co-presentation with the Muse in Bushwick on October 31: Tam Lin, created by composers Fiona Gillespie and Elliot Cole, and a new Firebird, choreographed by Angela Buccinni-Butch and Cynthia Dragoni.

Tam Lin is a setting of a Scottish fairy tale and ballad, one that Fiona Gillespie grew up on. “Part of my desire to set it was based on my love for a beautifully illustrated children’s book version of Tam Lin in which Jenny is depicted as having red hair, and this awesome outfit, and who carries out this incredibly brave act” Fiona says between laughs, as if to acknowledge that her own red hair, stylishness, and fearlessness belies a distinctive resemblance.

The new ‘folk-rock cantata’ came together at a 2019 retreat at Avaloch Farm in rural New Hampshire with co-composer Elliot Cole and an expanded conglomeration of Makaris, an ensemble coined by cellist Kivie Cahn-Lipman that focuses on the music and culture of Scotland. “We wrote it together in a really wonderful way,” Elliot recounts, “I don’t think I’ve ever had a co-writing process that worked so smoothly and naturally and productively than working with Fiona.” Tunes and orchestrations were passed back and forth between the two, and an early decision about scoring fostered an even fuller collaborative spirit: rather than fully writing out all 12 parts, the music was notated in the style of baroque basso continuo, consisting only of a bass line, chords, and melody, leaving its actual realization to be fleshed out through a combination of experimentation in rehearsal and improvisation in performance.

The varying backgrounds of the players was also key to Tam Lin’s creation and its sound, with Makaris musicians variously versed in the improvisation-friendly realms of Celtic, early, contemporary, and rock musics. The combination of styles, while uncommon, here blends seamlessly, offering yet another example that what might be considered today’s ‘progressive rock’ is so often the result of classically trained musicians breaking the mold. 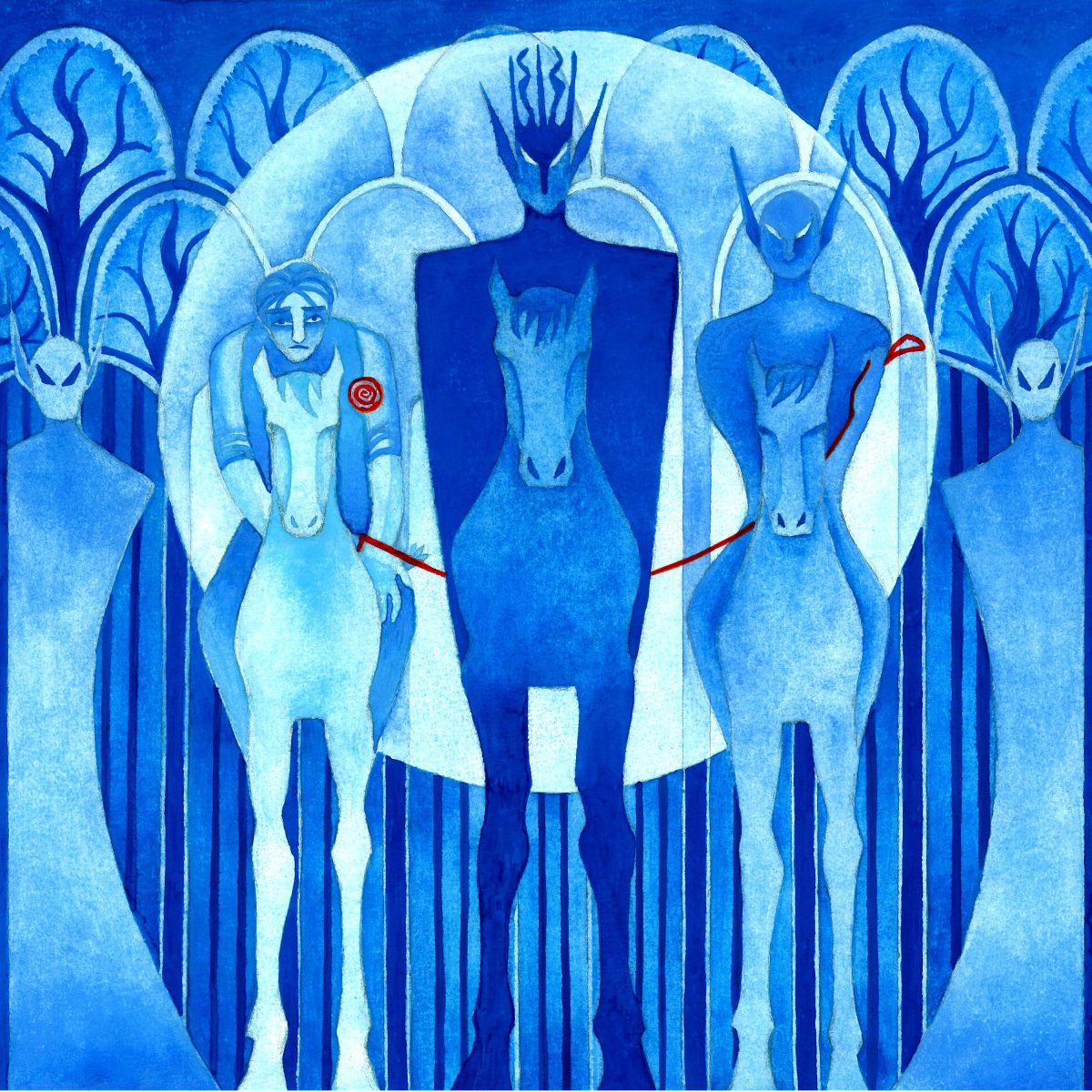 ABCirque and Next Realm Production’s Firebird is a similarly singular and ingenious mix of styles ­– of circus acrobatics and ballet – and its inspirations run deep for both of its choreographers, Angela Buccinni-Butch (of ABCirque) and Cynthia Dragoni (of Next Realm). Both started with ballet at a young age, and while Angela’s focus eventually turned towards circus, both have long held a desire to push beyond ballet’s conventions for the sake of fostering a deeper and more immediate kind of storytelling. Gesturing to the acrobatic apparatuses in the Muse’s space, Angela quips “of course it makes sense that the Firebird is going to fly, or that Katchei’s monsters are climbing all over each other; so then why shouldn’t we use what we have accessible to us, these fusions of styles, to tell the story better?”

We were sitting in this Firebird’s incubator venue, the Muse, a circus school in Bushwick that is also directed by Angela, and which led to the connection with Cynthia who was in search for a space large enough to safely teach her ballet students when her prior venue shut down due to the pandemic. “I walked in and I felt my heart open and just thought ‘what is going on here?’ And then Angela came over and it was immediate and hard ‘yes, what can we do here?’” The answer for now is not only this Firebird but a new Nutcracker as well, also melding circus and ballet, in the works for this December.

On paper the combination of ballet and acrobatics seems like a natural one – both being mediums of storytelling through seemingly impossible physical feats – and yet it’s a largely untapped combination. For Cynthia, the connections between the styles harkens back to the very beginnings of ballet: “before the steps, before everything was codified, ballet was what we would think of as modern circus. There were flame eaters, there was choreographed cavalry, there were dance numbers, there were love stories: it was all meant to make a great show.”

Again, through a combination of a deep vision, a space for creative experimentation, and a collaborative spirit, this Firebird has come together smoothly and joyfully. I caught the tail end of the professional cast’s final walkthrough, with jokes being cracked all through acts of incredible virtuosity, at so many points not knowing who were the ‘acrobats’ and who were the ‘ballet dancers,’ surely as intended, and all of it both spectacular and moving.

The serendipitous through line that also binds these two pieces together are their stories, both fairytales dealing with curses and the daring attempts to lift them. The present-day resonance of that storyline is immediate, not just a reflection of our collective yearning to see an end to the pandemic, but applicable also to the ongoing climate crisis, continuing racial and social injustices, the opioid crisis, addiction to devices, and the toxicity of online media, to name a few. And this is where both Tam Lin and Firebird go above and beyond, that their brilliance and energy is in the service of narratives that depict both the courage necessary to overcome great challenge and visions of what it might feel like to reach the other side.

5BMF presents Tam Lin and Firebird  October 31st at 3pm at the Muse in Bushwick; tickets and information here.