Co-produced by Newhouse Center for Contemporary Art at Snug Harbor

Your donation in support of "Terra Nova" allows us to offer this program free of paywalls, ticket fees, or subscriptions. Gifts of any amount are greatly appreciated!

Select a donation amount below, or choose "Custom Donation" to name your own amount.

“[An] unexpectedly sophisticated new song cycle musing on the tangled history of exploration and colonization.” — The New York Times

5BMF marks a triumphant return to live concert performance and the grand finale of its 2020-2021 Digital Mainstage Season with the New York City and online premieres of Terra Nova, a concert-length song cycle composed by the members of Oracle Hysterical and performed in collaboration with Hub New Music.

Commissioned by Hub New Music and 5BMF, Terra Nova will be presented live in partnership with BPL Presents on May 15th in a free, outdoor performance on the steps at Brooklyn Public Library’s majestic Grand Army Plaza location, and also filmed at the historic Newhouse Center for Contemporary Art at Snug Harbor, Staten Island, for its online premiere on June 17th.

Both venues share deep connections with the musical material. Terra Nova will be in its element on the grounds of Brooklyn Public Library at Grand Army Plaza, one of the city’s great monuments to the printed word, whose collection contains all of the texts that inspired these new works. The Newhouse Center for Contemporary Art, by contrast, shares in the songs’ spirit and history; now a museum for contemporary art, it was once a dormitory for sailors, with frescoed walls that still read “Rest after dangerous Toil,” a 188-year-old space, existing then and now for intrepid explorers and explorations.

A collection of songs inspired by new lands, and the people who ventured into them 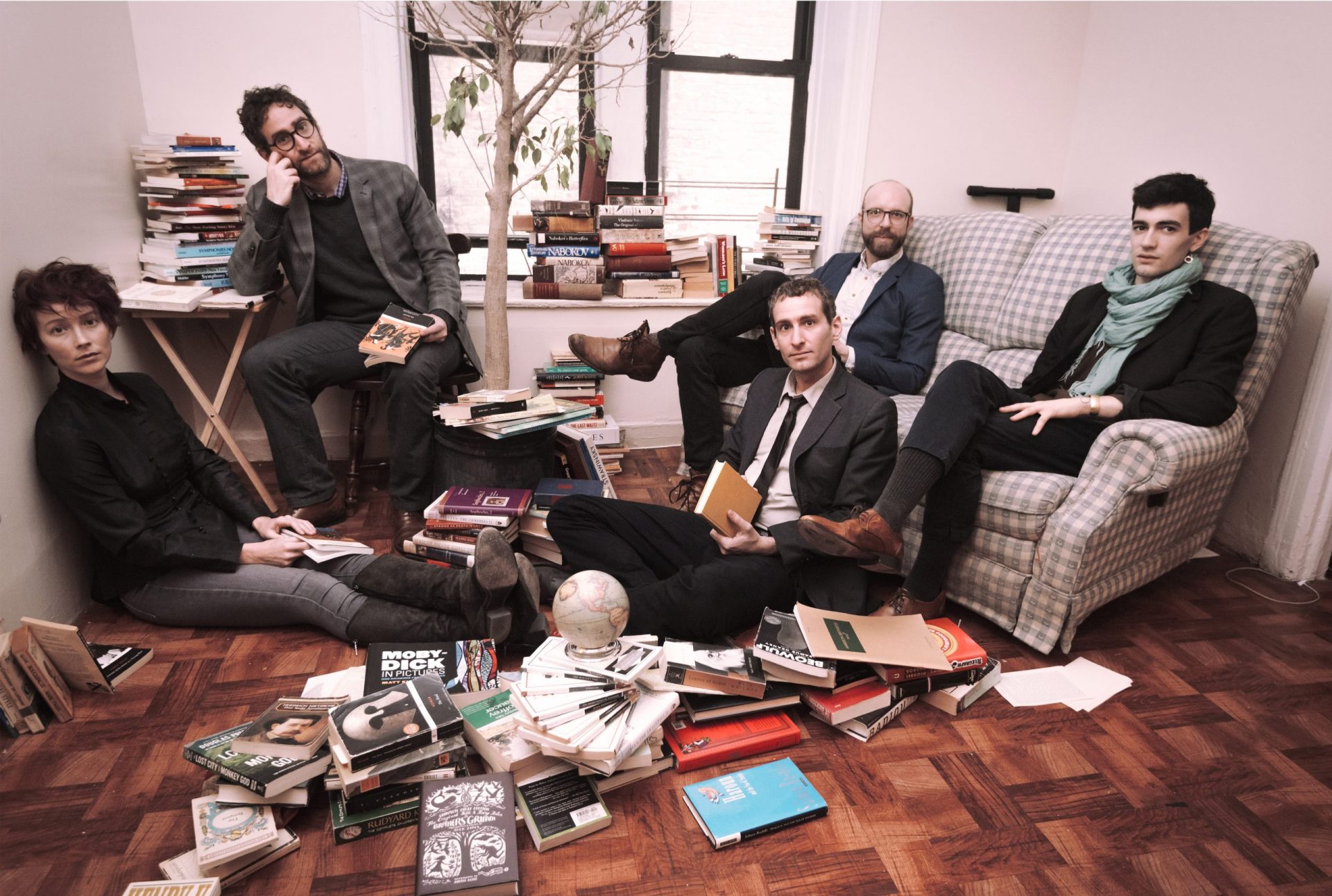 Part band, part book club, Oracle Hysterical combines eclectic musical influences with literary breadth. All members of the group perform and compose, with each project developed collectively. Oracle’s works occupy the fluid space between classically-inclined song-cycle and art-rock concept album. The group’s songwriting illuminates fragments of great literary works like a child in a dark forest with a flashlight. Text sources have ranged from Grimms’ Fairy Tales to Greek tragedy, and falsely-attributed Shakespeare, all in collections of songs that distill centuries-old writing through a unique contemporary lens.

The group’s recent past projects include Hecuba, released on the National Sawdust Tracks label in May 2018, a lush and experimental rock-leaning album based on Euripides’ 424 BCE tragedy of the same name that tells the story of the disgraced queen of Troy, her city razed and children murdered, as she descends from nobility to primal violence. In 2017, Oracle Hysterical collaborated with period-instrument ensemble New Vintage Baroque on Passionate Pilgrim, released on Naxos/Vision into Art, called “music that is unstuck in time” by the Wall Street Journal, and what it would sound like if “Belle and Sebastian were to cut a record of Baroque-inspired folk songs,” by the New Yorker. And in 2016 The Sea, a collaboration with the Grammy-nominated orchestra A Far Cry, premiered at the Isabella Stewart Gardner Museum; a song-cycle weaving together texts by history’s greatest seafarers, explorers, and aquatic fabulists, from Shakespeare to Homer, and John Donne to the Book of Jonah.

Oracle Hysterical has appeared at the MATA Festival, the Berkshire Fringe Festival, The Stone (NYC), The Hideout (Chicago), (Le) Poisson Rouge (NYC), National Sawdust (NYC), the Toledo Museum of Art, and at the Lucerne Festival Academy, where they were Spotlight Artists in 2011.

Called “contemporary chamber trailblazers” by the Boston Globe, Hub New Music — comprised of flute, clarinet, violin, and cello — is forging new pathways in 21st-century repertoire. Through creative programming and ambitious commissioning projects, the quartet of “intrepids” (WQXR) celebrates the fluidity and diversity of today’s classical music landscape. Its performances have been described as “gobsmacking” (Cleveland Classical) and “innovative” (WBUR), and HNM was named one of WQXR’s “10 Cutting-Edge Artists that Have Captured the Imagination” in 2016.

Hub New Music brings its passion for adventurous and relevant programming to global audiences as both a quartet and as collaborative artists. Recent projects include The Nature of Breaking, a 30-minute collaborative work with composer/harpist Hannah Lash; and a choreographed production of Robert Honstein’s Soul House with Boston’s Urbanity Dance. Upcoming projects include Requiem for the Enslaved, an evening length mass by Carlos Simon supported by Georgetown University’s GU272 Project that honors the lives of 272 African American slaves and their descendants; a new ‘modular’ work by Sō Percussion’s Jason Treuting; and new works by composers Nina C. Young, Nathalie Joachim, and Laura Kaminsky.